Much to the chagrin of the chefs and hosts, none of the guests arrived in pajamas, but Monday’s FIVE at FIVE™ certainly felt like breakfast at the family table – if your mom was an award winning bad-ass chef who cooked with things like quail eggs and chicken feet. FIVE at FIVE™ hosts five multi-course dinners with five select Denver chefs (get it? Five meals, five chefs?) each year. This meal was the 2nd in the series and featured a “breakfast for dinner” theme – hence the pajamas encouragement.

The event was hosted at Novo’s coffee roastery, so the smell of fresh coffee filled the room as a familiar reminder that breakfast was on its way.

Novo’s head roaster, Eric Rosenberg, treated me to a beautiful latte that tasted as delicious as it looks. Modest as ever, he assured me the latte art is better at t

heir retail locations, but it’s a little hard to believe – just look at that thing! Brian Smith, of Coohills, started us off with a tasty cocktail called, “Always a Bridesmaid” which featured Teatulia lemongrass tea liqueur and a little bubbly.

How do you make a lemongrass tea liqueur?

Brian puts the liquid tea on heat and reduces it with lime juice (straight sugar might overpower it). Once you have a nice thick reduction, you can add your liquor of choice (Brian used white whiskey) and reduce it back down to a nice liqueur consistency.

Trust me, this stuff is worth the effort – a not-too-sweet apératif to start the stellar drink line-up. After picking the brain of new Coohills sommelier, Jonathan Greschler, we sat down to our first taste by Jorel Pierce of Euclid Hall.

Never one to just slap something on a plate, Jorel’s piece had a little story. His concept of “The Hen and the Egg” was inspired by the French concept of “Garde Manger.” Garde Manger literally means “keeper of the food,” and has traditionally been the title of the chef who is responsible for prepping and seasoning the cold or room temperature appetizers.

Jorel wanted to pay tribute to that chef’s responsibility to use up the products that the other chefs have discarded as part of the day’s amuse bouche.

Jorel’s dish also came with the disclaimer NOT to eat the salt pedestal he made for his egg. The preparation for the egg part of this dish was quite advanced and warrants its own explanation. After hacking off the top of the eggs, leaving a jagged edge, Jorel filled the eggs with layers of tarragon custard, chicken thigh rillette, sliced black truffles, and soft scrambled egg. He then submerged the bottom of the eggs in a salt water to cook the layers together.

You can’t even imagine the great textures that came from this creative preparation!

Brian Smith’s next cocktail also came out at this time, arriving in a giant French Press. Playfully called a, “Misnomer Press,” Brian played with Coffee Cherries, which actually give off more of a tobacco taste than cherry or coffee. To give the misnomer some more… well… meaning, Brian added a tart cherry liqueur, vodka, and cream, creating a sort of cherry cordial-style white russian.

It was served chilled in little espresso cups and was quite tasty!

We shifted around the menu to Sean Yontz, of El Diablo, and his Chilaquiles — this was the show-stopping dish according to most of my table. The rich and juicy Polidori Sausage chorizo was magnificent and the family style bowl had such a great warmth to it. 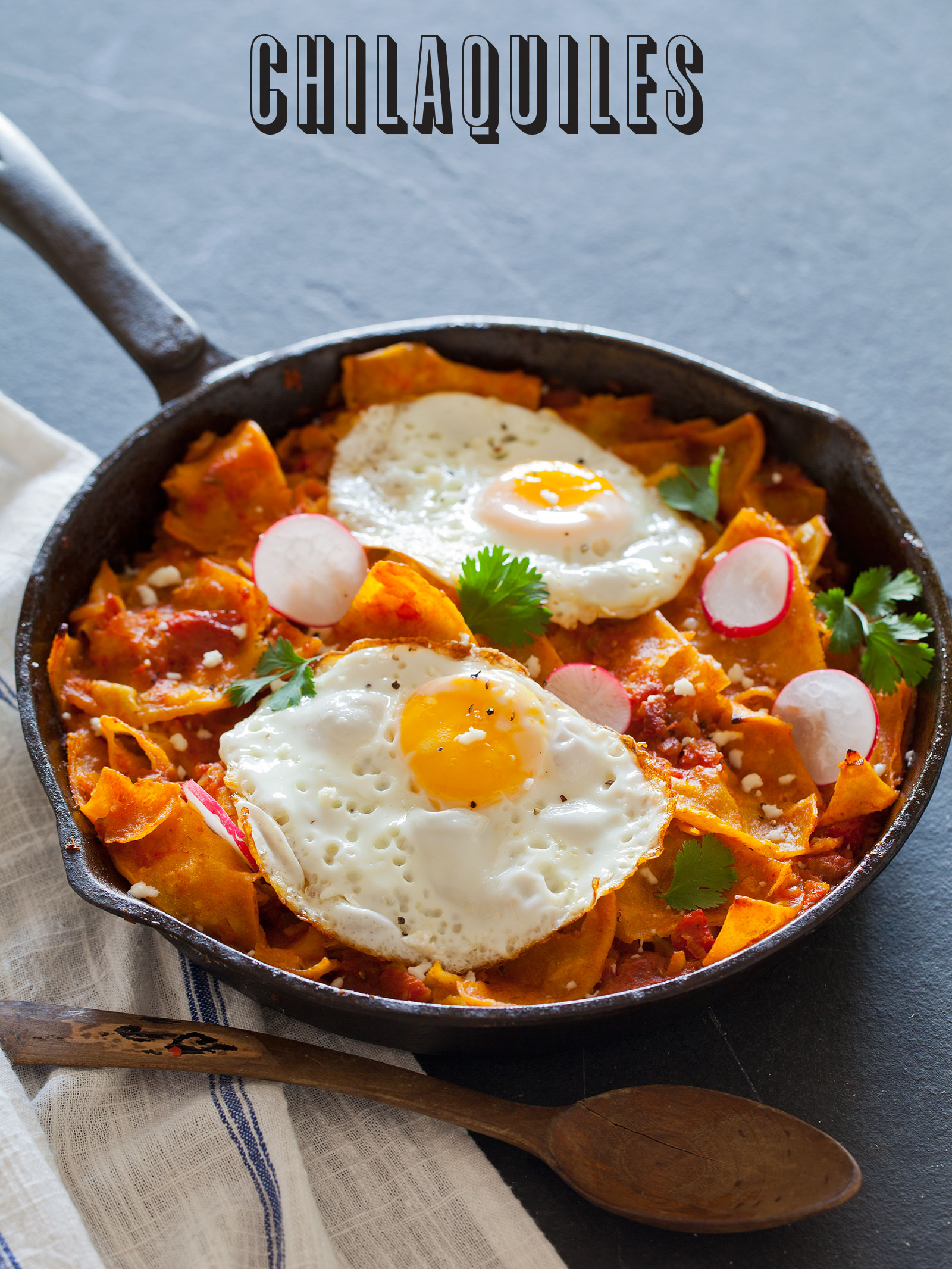 I had seconds. ‘Nuff said.

As guests were invited up to start tasting the bloody mary bar, Jorel’s braised eggs came out on gorgeous skillets. I could have licked that skillet clean the sauce was so tasty. Romesco, lardo, 5 year pittig, persillade – oh how it made the perfect combination. I just wish someone could have brought me a baguette so I could have wiped up my plate of every last drop!

We moved quickly along to Ian Kleinman’s first potato dish, which many at my table argued was his best of the evening: Sous-Vide Ranch Potatoes with a Grilled Olive Tapenade. Kleinman explained to me when I walked in that his potatoes had been marinating in their ranch flavor overnight in sealed bags to develop their flavor and moisture. It felt simple but tasty and I thought the portioning was just right.

Chef Brian Laird’s pizza arrived and far exceeded my expectations. This was probably the dish I was the least excited about and ended up being one of my favorites. The sauce, the mushrooms, the arugula, and quail egg made for a really fresh dish in what was starting to become a very heavy meal.

I was so busy eating and admiring this pizza that I couldn’t quite get a good photo (sorry, Brian!) and unfortunately, there weren’t any pieces left for seconds.

I’m really looking forward to tasting some of Brian’s work at Sarto’s in Jefferson Park.

Right along we moved back to Ian Kleinman for his Creamy Potatoes and Whole Grain Mustard Spatzel. I really loved this dish for its elevated casarole-y qualities, but many at my table were not huge fans. It certainly isn’t diet food, but I really did feel like it was something my yiddish grandmother would have made. Then we got to Matt Selby, of the Corner House, and his Poached Salmon dish. I have to say that when I tried the haricot vert (green bean) on its own, I didn’t really like the taste. But when I had it together with the poached salmon, I found it beyond tasty. My date was not a fan – it was too fishy for her – but that plate was easily devoured by neighboring tables before it even made a full pass.

During all of this, Brian Smith presented us with 3 variations on the bloody mary.

Now let’s get one thing straight – I don’t like bloody marys. But if Brian Smith is making them, move over and give me seconds.

These are real deal cockt

ails – not just some tomato juice and vodka with pepper. Nimo Mary (lower right photo, on the right) – an asian take on the bloody, this was probably my favorite of the 3. It had a nice green color from the squid ink and got a little kick from ginger.

Johnny B. Mary (lower right photo, on the left) – a spicy spice fest! I don’t remember what went into this thing, but it was definitely a sinus cleanser!

Back to the food…

Kleinman’s last dish came out – a potato quiche with smoked oysters in the center. I really quite enjoyed this, but many diners were feeling a little “potato-ed out.” Hey, it’s breakfast, guys! Oh well, more for me!

We closed the evening with Jorel’s Bacon Toffee Cinnamon Buns and a white whiskey dessert cocktail – both were outstanding. It’s hard to go wrong with bacon, and these sticky buns really delivered on that sweet/ salty flavor. This night was not just the 2nd dinner in the 5-dinner series, but it was also Chef Brian Laird’s birthday. Of course, everyone sang and gave the Chef a big round of applause for spending his day cooking for all of us.

Someone get that man a cake! The next FIVE at FIVE™ event will be on July 15th. To get the latest event info and find out when tickets go on sale, like FIVE at FIVE™ on Facebook.

Be sure to check out the gallery below for more pictures I couldn’t fit in the post!

What do you think about breakfast for dinner? Do any of these dishes make your mouth water or your stomach lurch? Let me know in the comments! Prep for “Always a Bridesmaid” “The Hen and the Egg” preparations The Chefs on rotation – Ian Kleinman up to bat